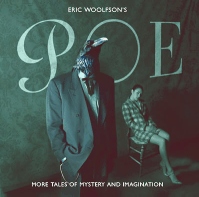 Back in 1976 Eric Woolfson and Alan Parsons created "Tales of Mystery and Imagination", in 2003 Eric Woolfson revisits the life and works of Edgar Allan Poe with his album "Poe". While some tracks are obviously about some of Poe's great works, other songs are more about the man himself..

More information is available at the official album site.

This title is available at Amazon.com


Angel of the Odd instrumental

The Pit and the Pendulum lead vocal Steve Balsamo

The Murders in the Rue Morgue lead vocal Eric Woolfson

Goodbye to All That choir


lyrics for these tracks not on line


Back to The Avenue Home Page