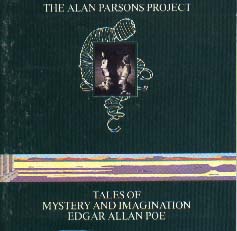 Tales of Mystery and Imagination (1987)

From the time of its initial release, "Tales" had been re-released many times with different cover artwork on different formats from vinyl and cassette to the dreaded 8-track. But even up to the mid-eighties this record had not been put on CD. When the time came, Alan took the high-road and instead of just slapping it into a jewel case, he went back into the studio and remastered this classic album.

A Dream Within A Dream instrumental (4:13) [with narration by Orson Welles]

The Fall of the House of Usher instrumental

To One In Paradise vocal: Terry Sylvester (4:46)


Back to The Avenue Home Page